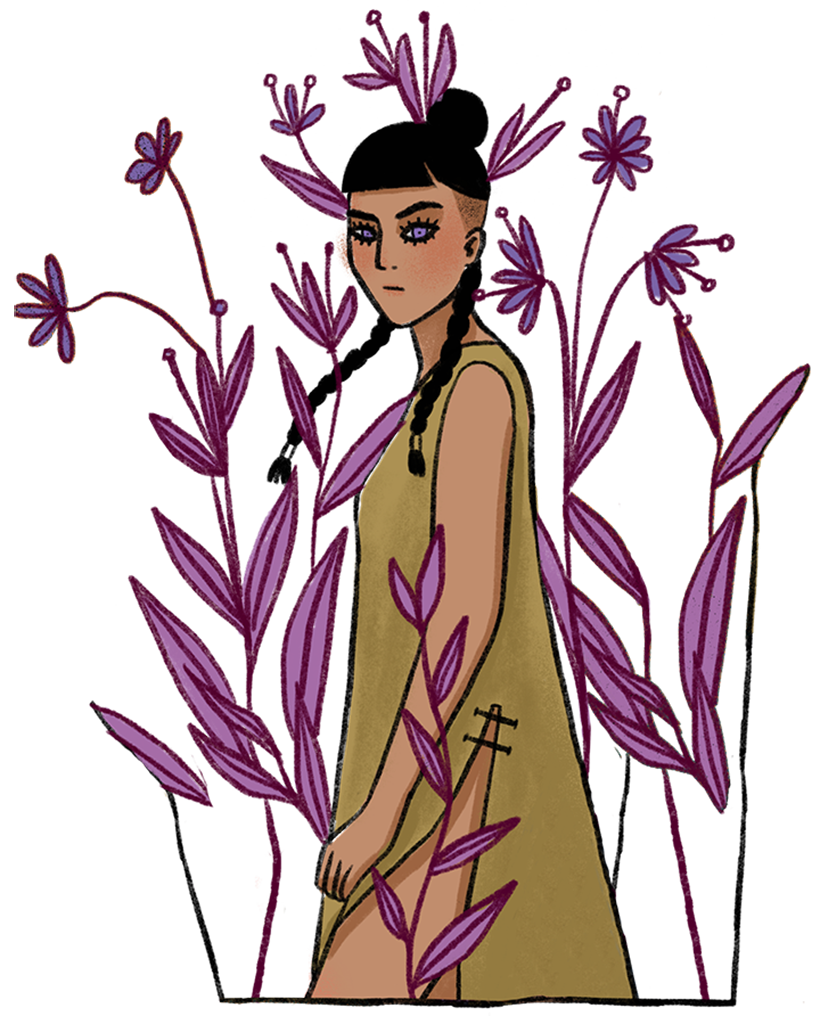 Astghik whispers through our plant body and we whisper to our kin who then whisper to Mina that Astghik wants to make love. They whisper back and forth about the happenings of their day and the whisperings of a growing tension between neighbours. Astghik tells Mina that she and Anna have been hearing a thumping sound from the roots of our elder trees and that their mother said it was a bad omen. Mina changes the subject to making love then forms a plan to meet in the midwife's garden behind a large pile of kindling that is used to keep the village fire burning.

Astghik and Mina go to collect and clean Anna’s cold body. Astghik wraps her hands around Elmast’s neck. Mina pulls Astghik’s hands away and Elmast falls onto the kilim and Anna’s blood soaks through Elmast’s hands and knees.

Astghik demands to wash Anna’s body alone. After Anna's body is clean, Astghik takes Makrouhi to Mina’s home and Mamik holds her for some time. Mamik assists with sewing a secret pocket filled with our seed-kin onto the Makrouhi's collar. We whisper to Mina a recipe of herbal tea that will calm Astghik’s heart-pain. Mina brews enough to fill a basin for a bath.

The room is quiet and Anna lies in a pool of her own blood.

Anna and Astghik grow together. We are in the room when they arrive. We watch them emerge from the portal, one after another. Anna enters our world ninety-five seconds after Astghik. Their mother does not bleed until much later.

The room is still quiet and Astghik stands next to Anna in a pool of her own tears.

Thirty-seven people gather in a small room, all dressed in black. We are in our plant body form, sensing from a tall table next to Anna’s clean body. The person responsible for Anna’s death is also in the room. Astghik looks into their eyes and whispers. The person leaves the room. Astghik turns back to face Anna ad pulls a strand of hair away from her cold cheek. Anna's infant is wrapped onto Astghik's chest, asleep and dreaming. We feel the vibrations of her tiny heartbeat, then a rhythmic stomp, stomp, stomp and a loud bang. Astghik’s gaze does not break away from Anna when thirty-six people turn towards the door where the loud bang came from. A white-haired elder opens the door to three people in uniform. They stomp into the small room and confiscate weapons. Several pools of tears form across the ground as nine people from the small room are forcefully escorted outside. Nine banging sounds. Nine people lie in a pool of their own blood. Twenty-six people exit the small room and Astghik remains standing next to Anna’s clean body.

Astghik holds Anna’s cold hand and a person in uniform attempts to pull her away from the cold, clean body. Astghik refuses to release Anna’s hand. The person in uniform notices that Astghik and Anna are identical twins and loosens his grip. Astghik uses this opportunity to strike him on the head with the clay vessel that holds our plant body. He returns the strike with the bottom end of his weapon. Astghik and her niece fall to the ground. Two people in uniform enter the small room and carry them outside where nine people lie in a pool of their own blood. Astghik manages to escape the grips of the people in uniform and runs for the hills. The small room fills with flames. We are burning along with Anna's cold, clean body.

We often accompany the whisperers when they gather in circles.
It strengthens our bond, to whisper and move our bodies together.

We feel,
their heartbeat,
through our roots.

Even after they are long gone.

Astghik is in Constantinople, endlessly cleaning, ironing, washing, folding, sweeping, wiping, scrubbing. Astghik is mostly scrubbing. She does this in exchange for small amounts of resources. The family for whom Astghik works speaks the same language as she does and drinks the same coffee, but they never invite Astghik to sit with them for bread. Astghik eats bread with the others who clean, iron, wash, fold, sweep, scrub. Astghik tries her best to always be in the presence of others, and never by herself. Sometimes her work requires her to be alone, and it is during these moments that she is cornered by the one who is always wearing a clean suit, a suit that Astghik must iron herself. Astghik is cornered by the one in a clean suit and their portal is nonconsensually violated. The first time this happens, Astghik feels a fire in her body and heart. Not the type of fire that she feels when she makes love to Mina. The fire that Astghik feels when she is violated is akin to the fire she feels when she stands in the same room as the person who is responsible for Anna’s transition. It is the same fire she feels when she sees pools of blood, when she passes the people in uniform, when she hears about the neighbours who stole her blood-kin’s belongings only moments after the bodies were hung and burned. Astghik is cornered often, and so she is scrubbing often, too.

Astghik is able to collect and hide the little amount of resources that she receives in exchange for the scrubbing. She plans to use these resources to find Makrouhi, then to make a new home where Mina can also join. Astghik refuses to believe that little Makrouhi has transitioned, as her connection to Anna from their days together in the portal formed an unbreakable bond. This bond extends to Anna’s kin, and Astghik can still feel little Makrouhi now.

Astghik remembers her bond with Anna. She remembers the first time they sang in harmony, and how the grass around them grew so quickly and so tall that it surrounded them both like a cocoon.

Astghik remembers feeling body-pain behind her portal and in her lower back while Anna birthed little Makrouhi.

Astghik remembers how fast she ran for the hills with little Makrouhi wailing on her chest, crying for her mother. Astghik was afraid of what the people in uniform would do to her niece, so she hid her under one of our elder trees at the foot of a hill. Little Makrouhi did not settle until Astghik placed her on the earth, near our roots. She asked us for assistance, for protection. We obliged, growing our roots up and over Little Makrouhi like a swaddle. Astghik promised her that she would be safe here until the people in uniform departed. She whispered to us, to send Mina a message about little Makrouhi's hidden location, then she ran towards the main road.

Astghik can feel her bond with little Makrouhi, it is a thread made of light that connects them across time and space.

Astghik is ironing a clean suit when one of the others who prepares food for the family delivers a message. A young man named Mehmet is waiting to see her in the room where clothing is washed, in secret. The one who prepares food instructs Astghik to be quick with their meeting. Astghik goes to the room where the clothing is washed and finds a stranger with familiar eyes. They both stand there for a moment before Mehmet shapeshifts to their original form, as Mina. They embrace then immediately claw at each other because neither believe that they are both alive and together again. There are many pools of tears forming, and they hold each other’s faces until Mina refers to the limited amount of time they have before Ali becomes suspicious of Mina’s whereabouts. The first thing Mina speaks of is little Makrouhi, and how they found her in the hills under the stead of our elder tree. They tell Astghik about how Ali was able to take the sleeping infant to the nearest orphanage. They both vow to do what they can to retrieve Makrouhi, then they whisper a promise-bond. With not much time left to speak, Astghik asks Mina about Leyla and their new home and name. While Mina struggles with their heart-pain because of the tensions between neighbours and all the kin that they lost in the fire, they also feel joy in their body in its true form, a joy that that they had been yearning for some time now. Astghik smiles then forms pools of tears as they feel heart-joy and heart-pain at the same time. Then they feel the fire, and hope.

We hear all of this through our seed-kin form, because Mina brings us along in a small paper packet, which they hand to Astghik before departing.

We hear all of this, because we are always listening.

We are whisperers.
We are powerful.
We survive on our own terms.

Although we are conduits, we are also our own.
It has been this way for time immemorial.