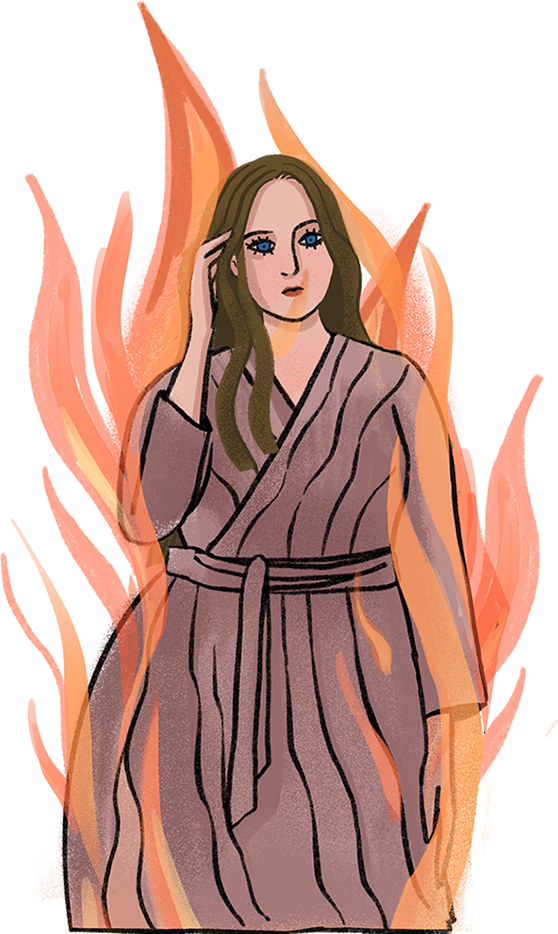 Maria brings our plant bodies into many rooms where new life emerges from portals. Maria is the assistant to a person who is known for ushering forth new life. This person is often working in pools of blood. She knows how to stop the continuous outpouring of blood but is not always successful. She is known by the whisperers as a midwife. Maria always places us on the tables inside the rooms where new life emerges because we are able to whisper to each other if the pool of blood grows more than the midwife's liking. We are able to assist in stopping the blood by whispering various incantations. The midwife is happy to have a whisperer by her side for this reason.

Maria has just assisted in bringing forth new life. She is washing blood from her hands and a vision creeps in from behind her eyes. Maria is a seer, that is her power. After her vision dissipates, she whispers to us of a premonition about people in uniform destroying our kin, our homes, and our bonds with our neighbours. The whisperers listen through our plant body in their respective rooms, with held breath.

Maria and Vartan stand side by side. She looks into the ceremonial fire and sees Anna sitting in a pool of blood, holding two little children. One is Makrouhi, she is alive and well. The other is dead, unnamed. Anna hands Makrouhi to Astghik, who then hands her to a boy with trembling hands and familiar eyes. Anna looks down at her dead child and Maria's vision ends in a heated blur.

Maria also sees herself in the ceremonial fire, with black and blue markings on her hands and forehead. When she looks up at Vartan, his eyes appear hollow with darkness for a moment, until he takes her hand.

When Maria and Vartan jump over the fire, they are bonded. Anna and Astghik weave their voices through song like they did before they emerged from the portal. Our plant bodies bloom and the ceremonial guests breathe in the scent that we omit. We feel the heartbeats of each whisperer, they are in sync. We ignore the thumping sound of boots on earth, a secondary beat that vibrates at an increasingly quicker pace. Zulal brings her knives and dances and throws them into the ground. All the kin and kin of kin move their bodies, but when the whisperers dance together, the rest form a circle around them.

They dance in circles like their kin,
and their ancestors long gone.
They move their bellies and jiggle their fat.
They shake the earth
with their bodies and voices.

Maria waits until nightfall to whisper to our seed-kin. She whispers for many moons until she is taken to a dusty room with three others. They surround Maria and speak with soft voices. Maria's heart beats quickly.

The soft voices belong to a kind family who allow Maria to place our seed-kin into new soil so that we can grow into our plant body and whisper to the others again.

MARIA has porcelain-like skin, long golden wavy hair, and blue eyes. She is on the plumper side with very wide hips. She is awake in a moonlit room where three people are sleeping soundly nearby. She is looking out the window and rubbing the tattoo on her forehead, which is fully healed now. Her hands are also tattooed. Someone touches her shoulder and she jumps as if she is being attacked, then calms when she sees that it is only her new father-in-law, HASAN.

HASAN
Breathe, my daughter. It is only me.

MARIA
You scared me. I’m sorry.

HASAN
You are deep in thought, I'm sorry I startled you. You're always staring up at the stars at night. Get some sleep, my daughter.

MARIA
I’ll go to bed soon, just give me a moment.

HASAN puts his hand on MARIA’S cheek and sighs. MARIA blinks at him reassuringly. HASAN turns to walk away, then remembers something and turns back.

HASAN
Oh, Zehra wanted me to tell you, Aylin was blessed with first blood and you must help her tomorrow to prepare for the ceremony.

MARIA nods. Something that HASAN said gives her an idea. She waits until HASAN is out of sight then runs to a cupboard and pulls out a white cotton napkin. She lays it near the windowsill and looks up at the moon, then shifts the placement of the napkin so it is fully immersed in moonlight. MARIA quickly pulls out a hair pin from her bun and pierces her index finger, releasing blood onto the napkin. It soaks up the blood rapidly and the bright red color spreads across white cotton. MARIA impatiently moves her eyes across the napkin, looking for something. When she finds what she's looking for, her eyes settle on one spot and she takes in a deep, sharp breath.

Maria plucks feathers from the skin of a dead chicken when Zehra, one of the three people with soft voices, comes to deliver news of Zulal. Maria is already aware that Zulal has been walking on dry desert earth but remains hopeful that Zulal will survive. Maria already knows about Mina, who goes by Mehmet now, and Astghik, who managed to escape and is now working as a housekeeper for an Armenian family in Constantinople.

Maria reads Zehra’s lips as she confirms the rumours about those who walked on dry desert earth, something about a death march, a river, and a low hum fills Maria’s ears then Zehra catches Maria’s fall. Zehra helps Maria into the house and where asks to be left alone. Zehra glances over at our plant body by the window, then tells Maria that she should be careful not to get caught whispering openly. We wait for Zehra to leave the room then remind Maria that she must keep a candle lit for forty days in honor of Zulal’s transition. Maria strikes a match with calm hands and whispers through us to tell the others of the news. Mina hears and a low hum fills their ears too as the river carries three bodies back to the earth.