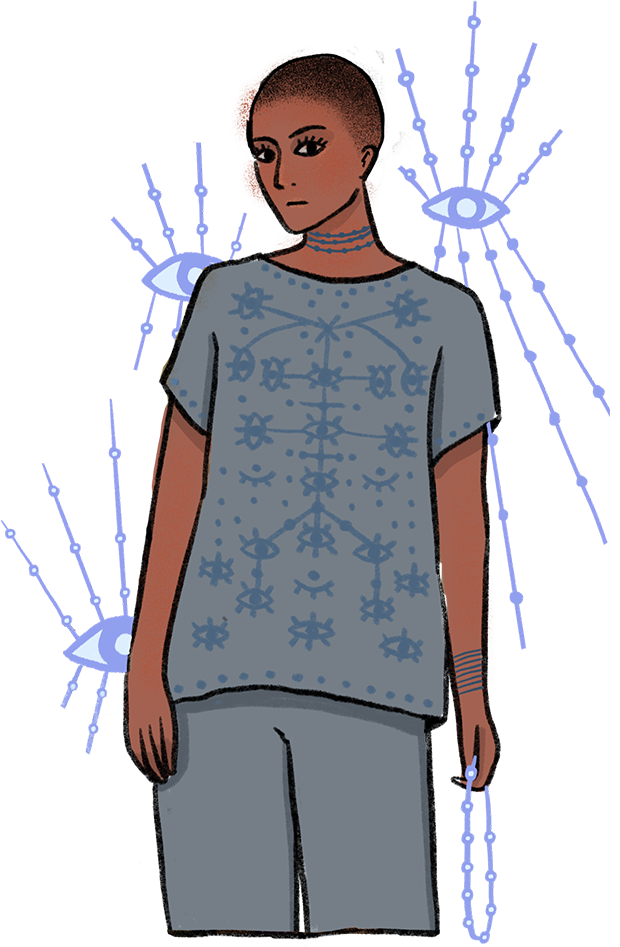 Five young children are playing in the middle of the village.

ZULAL has black, beady eyes and wild, curly ginger hair. MARIA has porcelain-like skin, golden wavy hair, and blue eyes. ASTGHIK and ANNA are identical twins. ASTGHIK has big purple-grey eyes and an olive skin tone, thick eyebrows, super short bangs with complex braids throughout her hair and slightly more angular features than sister. ANNA has the same features, except softer curves on her face and a short bob haircut. MINA has a striking nose and is darker in skin tone than the others, with their hair worn tightly back in a bun with a middle part. They seem uncomfortable in their dress.

Three of them, ASTGHIK, MARIA, and ANNA, are playing jump-rope and singing all together in Armenian, “sun, moon, star, ribbon” repeatedly. The other two, MINA and ZULAL are sitting nearby and watching their friends play, seemingly bored. The one who is jumping, ASTGHIK, looks over to MINA and smiles coyly. MINA smiles back and winks at her. ZULAL nudges MINA teasingly.

ZULAL
Stop flirting. Let’s go to the gorge and see what the whisperers are up to.

MINA
Yeah, right. You forgot what happened last time we broke their rules. We haven’t come into our power yet... We’re not ready.

ZULAL
Ugh, I'm so tired of waiting. How come Anna and Astghik came into their power already?

MINA
They've been practicing since they were little.

MINA blushes as they watch ASTGHIK, who is now turning the rope with her sister ANNA while they sing and harmonize together. The plants nearby sway back and forth and omit glittery dust that floats up into the air and dissipates. ASTGHIK catches MINA blushing and giggles. Several flowers bloom rapidly nearby. ZULAL stomps one of the flowers out.

ZULAL
Sun-moon-star-ribbon, I’m so bored of these chants. All we do is sing and collect sap for khoung. My hands are always sticky--

MINA
The chants are meant to prepare our spirits for what's coming, and that sap is sacred. We need khoung for ceremonies. That's how we call the--

ZULAL
Ceremonies, what ceremonies? We’re never invited to them...

MINA
Astghik and Anna have been. They've already communicated with ancestors through their power, their harmonizing...

MINA starts to turn their head back over to look at ASTGHIK again but ZULAL stops them.

ZULAL
God, Mina. Try to focus here! I want to see what they're up to in that damn gorge... (looks over at her friends jumping rope) If you don’t come with me, I’ll tell Astghik about how you call out for your Mamik at night.

MINA
What? How do you know about that?

ZULAL
I heard your Mamik telling my baba about it. What’s wrong with you anyway? Are you having nightmares? (doesn't let Mina answer) You should try putting a needle in your pillowcase. My mama taught me when I was younger. Came in really handy after she died. It was happening to my little brother for years, especially on the nights before her requiem service -- he used to wake up covered in sweat. You should try it, it works like a charm. The sharp point of the needle is supposed to prick the nightmare away and protect you from it.

MINA
Cool, I'll give it a try. Thanks.

ZULAL
Yeah, yeah. See, I helped you, now come with me to the gorge!

Mina keeps our plant body by a bright window in a room where food is prepared.

Mina’s blood-kin were unable to care for them after they emerged from their portal. The person that Mina now calls Mamik did not birth Mina herself, but cares for them as if they were blood-kin. Mamik is not a whisperer but watches Mina whisper to us and often takes care of us with gentle hands. Mamik creates small pools of tears near us when there is no one else in the room where food is prepared.

Mamik prepares food and Mina assists. A neighbour enters the room and prepares food with Mamik. The neighbour's name is Leyla. Leyla and her kin are of the people with whom Mamik’s people have tension, though there is no tension between Leyla and Mamik. Mamik and Leyla prepare the same sustenance and drink the same coffee. Many children run in and out of the room where food is prepared. Leyla offers Mamik’s children sustenance, from gentle hands into little mouths. Mamik does the same for Leyla’s children. Astghik enters the room and assists Mamik and Leyla with rolling the leaves of grapes while smiling at Mina. We feel Mina's heart skipping a beat. Mamik notices also, and places her soft hands onto Astghik’s cheek, as if Astghik was blood-kin.

The neighbouring families sit around a table and share sustenance. Mina and Astghik weave their fingers softly under the table. Mamik notices, but this time her face transforms into one that looks like it is holding back from creating a pool of tears.

Leyla and Astghik depart, and Mamik is alone with Mina. Mamik warns Mina to be cautious about being openly intimate with Astghik because there are many people who are fearful of bonds such as these. Mamik is not fearful of Mina and Astghik’s bond, but she is fearful of people learning about how Mina was born different from others. Mina was born as both. Mina does not want to dress in the same clothing as Mamik and Astghik. Mamik warns Mina that they cannot reveal their bothness to anyone other than Astghik, then reminds them that they can always dress to their liking inside the rooms in which they live. They embrace in a pool of tears and Mamik whispers the word ‘always’ over and over again as they sway their bodies back and forth together.

We have been placed in our plant body form near a window in a bright room.

Mina runs into the bright room and looks out the window. The neighbour’s house is on fire. A person with shaking hands walks into the bright room and hands a bundle of clothing to Mina. They undress and wear the clothing. The person with shaking hands instructs Mina to urgently place objects of sentimental value inside a small metal box. Mina places an unfinished piece of needle-lace and a string of evil eye charms into the box. They turn towards us, whispering to our seed-kin then shaking us gently. Our seed-kin fall onto a piece of paper. Mina folds the piece of paper and places our seed-kin into the small metal box. Shaking hands wipe Mina's tears as the neighbours house continues to burn. They both exit the bright room and we sense our seed-kin rattling around in the box, the sound of Mina panting and stomping from afar, then stillness.

Mina is surrounded by five others who sit in pools of their own tears. Shaking hands cut Mina’s hair and five people learn to call Mina by another name.

At the center of their gathering circles,
there is always a flame,
a mirror made of obsidian,
needle-lace sewn by their kin,
and us, in our plant body form.

We are with Mina in their small metal box. They whisper to us under the moonlight and we feel their heart-pain. Sometimes we feel the heart-pain of other whisperers, and sometimes we hear whispers from a time that has not yet come to be, like when Astghik leaves Constantinople to retrieve little Makrouhi from the orphanage then finds a new home where she is able to grow our seed-kin in a new garden to prepare for Mina's arrival.

MINA sits solemnly on a wooden chair in the middle of their neighbour’s living room. Their hair is no longer worn in a tight bun. The matriarch of the neighbour’s family, LEYLA, is cutting MINA’s hair off as her family watches quietly. LEYLA’s youngest daughter, ELA, is sitting at MINA’s feet. LEYLA’s oldest son, ALI, is keeping watch on their front door through a crack in the curtains. ELA breaks the tense silence.

ELA
Why did your parents name you Mina?

MINA
It's a short form of the name that my birth parents gave me.

ELA
What was the long version of your name?

ELA
So you're not Armenian?

LEYLA
(sadly)
That is the point, my dear Ela.

LEYLA looks down at MINA and softly touches their shoulder, then hands them a small round mirror. MINA looks at themselves and smiles slightly for a moment, then tears up and puts the mirror down.

ELA
I heard you have both girl and boy parts!

LEYLA
(angrily)
Enough! You don’t speak to your brother that way ever again, you understand?

ALI
Keep your voices down!

LEYLA shoots a stern, threatening look towards ELA then turns softly to MINA.
LEYLA
It suits you, my love.
MINA tries to smile reassuringly towards LEYLA, then feels a sharp pang on their forehead and reaches towards it, to rub the source of pain.

Mehmet is Leyla’s eldest kin. He is born with a heart defect and grows until he is half as tall as Leyla then dies in Leyla’s arms on the floor in the room where food is prepared.

Leyla spent many moons soaking pools of her own tears into Mamik’s chest. When Mamik and all of Mina’s kin transition at the hands of the people in uniform, Leyla invites Mina to live in her home and take care of them as blood-kin. It is fortunate for Mina that Leyla did not inform the authorities of Mehmet’s transition. Mina and Mehmet were born under the same solar rotation, and Mina looks like they could be Leyla’s blood kin. They cannot shapeshift for very long periods of time, so this is their only way to survive. When the people in uniform enter Leyla's home, they conduct a head count of her household kin and ask several questions, then move onto another house.

Leyla embraces Mina, now posing as her transitioned son, then Mina pretends to go to sleep. After Leyla and the children go to bed, Mina sneaks out of the house. They visit us in our elder tree form, near the symphony of stones. They place their hands into the soil near our roots, listening beyond the heartbeats. They hear the secondary thumping of boots on earth. They whisper incantations, requesting permission to see little Makrouhi, who is still dreaming in our stead. We pull back our roots to reveal the sleeping infant, and whisper to Mina that we can only keep little Makrouhi safe until the next new moon. Mina whispers to us that they have a plan, that they will convince Ali to bring little Makrouhi to a nearby orphanage.

Mina begs Ali to take them to Constantinople so they can find Astghik. Leyla is against the idea because she is fearful that Mina will be exposed, but she does not know that Mina is a shapeshifter. Mina can transform to keep themselves hidden from watchful eyes, for short periods of time.