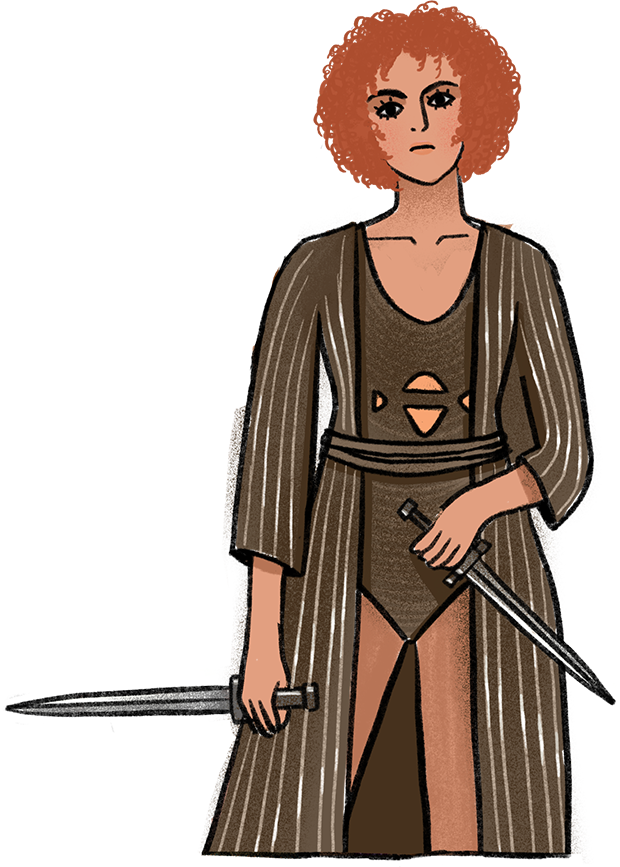 ZULAL pulls on MINA’s arm as MINA looks back at ZULAL, who seems confused by what just happened. The two of them are giggling and running down towards the gorge. The sun is setting and the bottom of the gorge is darker so they squint to adjust their eyes. ZULAL runs her hands across the rock formations while MINA gazes up at the full moon rising. They hear a sound behind some bushes and see the light of a fire. They follow the river and hide behind a tree on the edge of a clearing, careful not to get caught. A group of whisperers are dancing around a large, flat, smooth disk of obsidian with candles around it. They aren’t dancing the traditional Armenian dance that the young girls had been taught, but they are jiggling their hips and fat and seem to be in a joyful state of mind. There are about nine of them altogether, two generations at least. Two of them are off to the side in the corner of the clearing in the middle of a divination ritual. One is sitting cross-legged on the ground while holding a bowl of water over her own head and the other stands behind her dripping candle wax into the water and whispering.

MINA
Look, they’re divinating with candle wax! Mamik was telling me about that. Is that an obsidian mirror? I’ve never seen one of those in real life…

MINA looks around at the faces of the whisperers and recognizes their Mamik and other relative elders amongst them. ZULAL notices her elders too, but what catches her eye is the centerpiece. She notices that there is something floating above the obsidian mirror but she can’t tell what it was exactly. It seems to be made of needle-lace, but it is not flat. It is bulbous and fluid, like a torus. Whatever it is, YOUNG ZULAL feels confused when she looks at it, so she looks down into the obsidian mirror instead. She notices twinkling, then takes a step closer to the clearing to get a closer look.

ZULAL ignores the warning and takes another step closer. She can see the twinkling more clearly now, and is fascinated by what she sees. A starry sky, a whole universe in the reflection of the mirror. Then, entire solar systems and galaxies are reflecting in ZULAL’s eyes.

ZULAL is in her early twenties with the same black, beady eyes and wild, curly ginger hair. She is laying on her back on dusty ground, staring into the night sky. She has an infant sucking on her breast, asleep, and an arm around another small child sleeping on her other side. They dressed in rag, filthy, and dehydrated. There are some sounds of others nearby, but a deep, rhythmic vibration is starting to drown them out. They are staring up at the stars with resolve in their eyes. The sound gradually becomes louder as the pitch increases until it ends abruptly.

Zulal is the eldest of six children born to Berjouhi and Hagop. Hagop receives knives from his ancestors on the day of his bonding ceremony with Berjouhi as sacred inheritance. Hagop gives the knives to Zulal on the day of her bonding ceremony. Hagop shows Zulal how to dance while throwing knives into the ground, a sacred dance. This is when Zulal comes into her power. Zulal is a protector. She whispers incantations and creates circular outlines into the ground with her knives. Anything within the circle is protected from harm.

Berjouhi hands our seed-kin to Zulal and shows her how to grow and care for our plant bodies. She grows us from seed then moves us from clay vessels into the earth. We share our sacred resin with those who care for us, when our roots make home with earth. When Berjouhi falls ill, she instructs Zulal to show all the young whisperers in the village how to grow and care for us. When Berjouhi transitions in a pool of her own sweat, Zulal forms pools of her own tears, then washes her mother's body and begins to care for all the children her mother leaves behind. Under the light of a full moon, Zulal gently shakes our seed-kin into her palm then hands our seed-kin to Mina and Astghik and Anna and Maria. The five of them are mentored by the other elder whisperers in the village.

From Zulal's portal emerges four of her own blood-kin. One of her children is not able to speak. We whisper to Zulal that she should take this child into the middle of two intersecting roads and lightly slap their mouth. This unleashes the child's tongue. Her child is now a talented storyteller. Zulal is eager to show them how to whisper when they come into their power.

All but two of Zulal’s children lie in a pool of their own blood. She pulls our plant body from the soil and wraps us in a secret pocket sewn onto a long piece of cotton.

Zulal walks with bare feet on dry desert earth with her two remaining children. She swaddles one of them, a very small and light child, onto her chest with the long piece of cotton. She holds the sweaty hand of her other child, who is shivering and half as tall as Zulal. The small and light child is breathing slowly onto Zulal’s chest and releasing sweat into the long piece of cotton. We drink the sweat through our roots. Zulal and her other child bleed from their feet into the dry desert earth.

Zulal is laying on her back in the desert with her two remaining children. The people in uniform have been forcing them to walk for days on dry desert earth with no sustenance. Many have died from thirst or been killed by the people in uniform. Others have taken their own lives. Zulal whispers to us and hopes that the others will hear, but a person in uniform catches her and in a moment of panic Zulal stabs the person in uniform with her father’s knife, which she kept hidden alongside the secret pocket where our seed-kin is held. Zulal quickly realizes that the transition of this person in uniform will result in further violence. It means that Zulal will be killed, and that the lives of her two remaining children are in danger, as if they were not already.

ZULAL’s face in moonlight while she is standing over the bleeding body of the soldier. She is holding a bloody knife with her right hand by her side, and her left hand is squeezed tight into a ball by her other side. She is breathing hard and fast, almost like she is about to panic. She looks up at the moon and slowly calms down, then catches her breath. She looks down at the dead body, calmly. After a few moments, she goes to wake her sleeping children and together they walk towards the Euphrates river. She stands at the edge. In the background, the sound of soldiers discovering the body becomes apparent. Her infant stirs in her arms, and her other child looks up at her, tired, and somehow aware of what is about to happen. There is resolve in ZULAL’S eyes as she whispers to the river. The soldiers are running towards her. She holds her infant in one arm and picks up her other child with the other, kisses both of them on the forehead, then steps forward into the river.

We are in the desert, withering away on dry rock as Zulal’s body floats down the river called Euphrates. The soil is ready to welcome Zulal and her kin when they eventually return to the earth, and we can reunite.

Thank you for visiting.